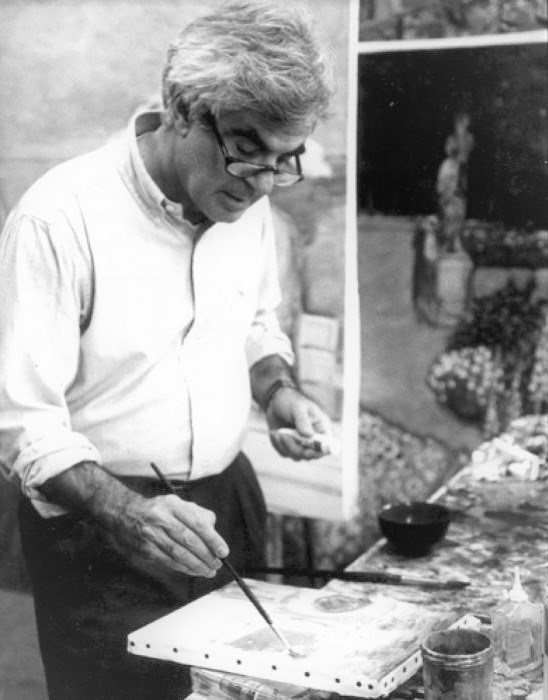 Born in Paris in 1935, Jean-Pierre Cassigneul was into a family devoted to fashion, a microcosm where Paris identifies women. He is the grandson and son of the founders of the Jean Dessès fashion house. Jean-Pierre Cassigneul evolves in this atmosphere. He breathes there and, at his height, from his distance, observes perhaps unwittingly, but from within, this strange cult of woman and elegance. The presence of the woman will multiply from then on in the world of the painter.

He had a very happy childhood, the war a little constraining, then an almost idyllic adolescence, student of the Academy Charpentier, then of the National School of the Beaux-Arts. Life really begins for Cassigneul when he finds Paris. He quickly became Associate of the Salon d’Automne. The exhibitions follow one another in France then in the United States and simultaneously in Japan.

The whole work of Cassigneul is dominated by the woman, the places of her childhood and today. Cassigneul provokes the imagination. We owe also to Cassigneul some still lifes and bouquets, gardens, groves, which took the continuation of the landscapes of its beginnings. There are the landscapes of Deauville and many secondary themes, sailboats, liners, flowers in bouquets or bushes, insistent balustrades, and pets, cat sometimes or more generally small dogs, presences always erased, silent but warm.

Recognition begins in Japan (150 works permanently exhibited at the Izu Lake Ippeki Museum), then in the United States (New York, Palm Beach, Beverley Hills, Chicago …) and finally in Europe. In 1987, the Paris City Council devotes a large exhibition to Trianon Bagatelle. His works are preserved in prestigious collections (France, Switzerland, United States of America, Japan, Brazil, etc.) After long years of absence in Paris Jean-Pierre Cassigneul exposes in the Galerie Taménaga which dedicates to him all its space to make room for a big retrospective of painting in 2006. As a way to celebrate the 40th anniversary of the establishment of Galerie Tamenaga in 2009, we held his exhibition presenting 50 significant works.